The US dollar fluctuated in a narrow range that tends to decline during the Asian session to witness the rebound to the second session of its lowest since January 3 last January against the Japanese yen following the developments and economic data followed by the Japanese economy, the third largest economy in the world and on the threshold of developments and upcoming economic data Tuesday by the largest US economy in the world.

The Japanese economy followed the release of inflation data with the release of the producer price index, which is a preliminary indicator of inflationary pressures, which showed steady at zero levels against a contraction of 0.5% last June, contrary to expectations for 0.1% growth, while the annual reading showed The index itself widened to 0.6% vs. 0.1%, worse than expectations for a 0.5% contraction.

This came before the third largest industrialized country in the world witnessed the release of the industrial sector data with the release of the Tertiary Industrial Index which showed a 0.1% decline in line with expectations against the stability at zero levels last May, leading to the release of the annual preliminary reading. The Machinery Equipment Orders showed that the decline shrank to 33.0% from 37.9% in June.

On the other hand, investors are currently awaiting the US economy to reveal inflation data with the release of the CPI reading which may reflect the acceleration of growth to 0.3% vs. 0.1% in June, while the core reading of the same index may show growth slowed to 0.2% vs. The annualized reading of the index may show acceleration of growth to 1.7% vs. 1.6%, and the annual core reading may reflect stable growth at 2.1%. 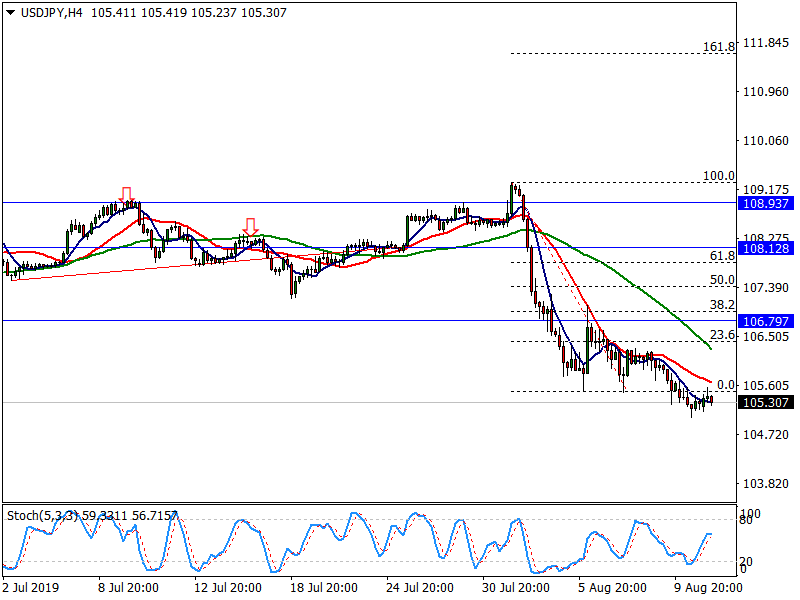 USDJPY is testing the 105.50 resistance level, which was previously broken and still below it, accompanied by the gradual loss of positive momentum by Stochastic, whilst the SMA 50 is a continuous negative pressure against the price.

Thus, these factors encourage us to hold onto our bearish outlook, with the next target at 104.60, while a break above 105.50 then 106.00 is the key to the intraday upside move.

Expected trading range for today is between 104.60 support and 106.00 resistance