The single currency of the European Union fluctuated in a narrow range tilted to decline during the Asian session to witness the rebound for the third session in six sessions from the highest since July 19 last against the US dollar on the eve of developments and economic data expected on Tuesday by euro zone economies and the economy American largest economy in the world.

The euro zone's largest economy, Germany, is also awaiting the release of the final CPI reading, which may reflect a stable growth of 0.5%, unchanged from the initial reading of July and against 0.3% last June. The wholesale inventories price index also reads for Germany which may reflect a 0.2% rise versus a 0.5% decline in June.

This comes ahead of the release of the ZEW Economic Sentiment for Germany and the Eurozone economies as a whole, which may reflect the widening contraction in Germany and the region as a whole to 27.8 and 21.7 versus 24.5 and 20.3 respectively in July. The report recently touched on the desire of Italian Deputy Prime Minister Matteo Salvini to hold early elections by October 13 as the government coalition nears collapse.

On the other hand, investors are currently awaiting the US economy to reveal inflation data with the release of the CPI reading which may reflect the acceleration of growth to 0.3% vs. 0.1% in June, while the core reading of the same index may show growth slowed to 0.2% vs. The annualized reading of the index may show acceleration of growth to 1.7% vs. 1.6%, and the annual core reading may reflect stable growth at 2.1%. 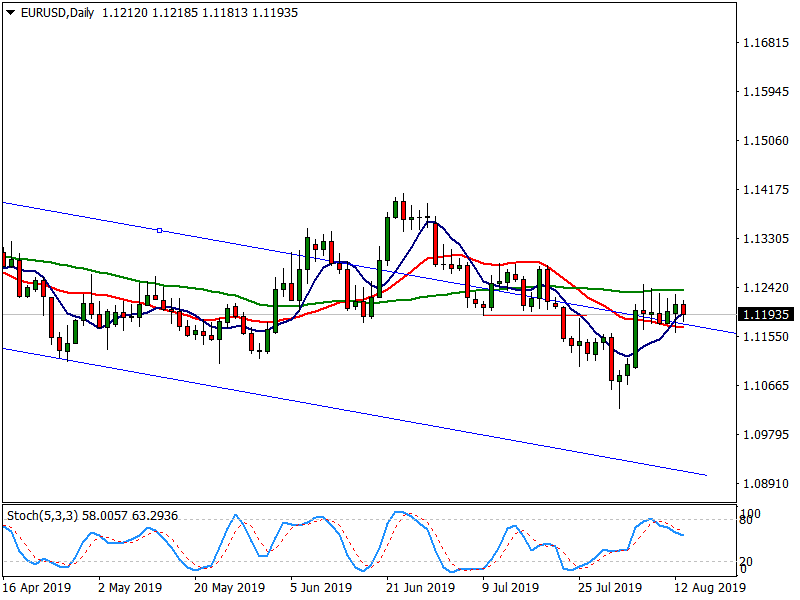 EUR / USD is back to fluctuate at 1.1180, where it is affected by stochastic negativity, as well as the price finds a strong intraday resistance level formed by SMA 50 in front of continuous positive attempts, and needs to overcome this barrier to confirm the continuation of the main positive scenario.

In general, we continue to favor the bullish trend over the coming period provided stability above 1.1180, where breaking this level will press the price down and achieve negative targets starting at 1.1100 and extending to 1.1000, while the next targets for the suggested upside wave are at 1.1350 then 1.1443.

Expected trading range for today is between 1.1130 support and 1.1290 resistance