The Australian dollar fluctuated in a narrow range, tilted to the downside during the Asian session to witness the rebound for the second session in five sessions from its lowest since March 18, 2009 against the US dollar following the developments and economic data that followed the Australian economy and on the eve of developments and economic data expected today Tuesday by the US economy the world's largest economy.

Reserve Bank of Australia Governor Philip Lowe noted in his testimony to the Australian House of Representatives last weekend that the Reserve Bank of Australia is ready to expand interest rate cuts if needed to support the labor market and stimulate inflation. In quick succession, we believed it was appropriate to wait and assess the consequences of monetary easing.

RBA Governor Lowe said last Friday that it was reasonable to expect a prolonged period of low interest rates in Australia, saying it was unlikely but likely to move to a minimum level of zero interest rates, adding that he hoped to be able to avoid that. , While stating that he would be willing to use exceptional monetary policy if warranted.

In the same context, the monetary policy statement of the Reserve Bank of Australia meeting held on the sixth of this month that monetary policy makers believe that the core inflation rate may reach 1.5% by December, before growth accelerates to 1.75% by the end of Next year to 2% by the middle and end of 2021, amid the indication that near-term risks to economic growth are more to the downside.

On the other hand, markets are looking ahead to the US economy to reveal inflation data with the release of the CPI reading which may reflect the acceleration of growth to 0.3% vs. 0.1% in June, while the core reading of the same indicator may show growth slowed to 0.2% vs. The annualized reading of the index may show acceleration of growth to 1.7% vs. 1.6%, and the annual core reading may reflect stable growth at 2.1%. 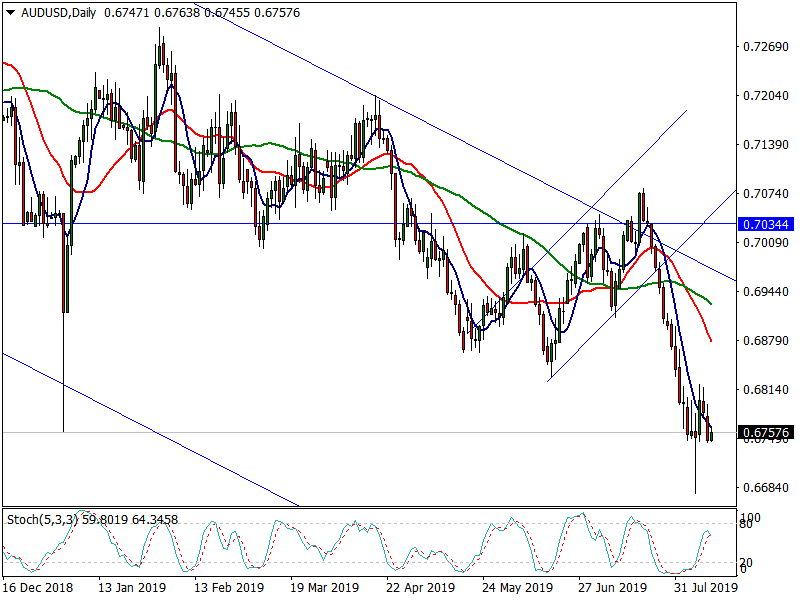 AUDUSD is showing quiet negative trading to creep towards our first awaited target at 0.6700, and we note that Stochastic begins to cross negatively, providing a good incentive to support further downside expectations in the coming sessions, noting that exceeding the mentioned target will push the price to 0.6625 as the next stop.

Therefore, the bearish scenario will remain valid for today, provided it holds below 0.6830.

Expected trading range for today is between 0.6700 support and 0.6800 resistance