The Australian dollar rose during the Asian session to witness its bounce to the seventh session from the lowest since October 21, 2002 and to pay off the first weekly gains in three weeks against the US dollar amid the scarcity of economic data by the Australian economy and on the cusp of developments and economic data expected today Friday by The US economy, which includes the congressional vote on the stimulus package, is the largest in US history.

Investors are currently awaiting by the US economy the disclosure of personal spending and income data, which may reflect the stability of personal spending growth at 0.2%, little changed from the previous reading last January, and the slowdown in personal income growth to 0.4% compared to 0.6% in January / January, while a reading of the core personal consumption expenditures index may show that growth accelerated to 0.2% compared to 0.1% in January.

This comes before the disclosure of the final reading of the University of Michigan's index of consumer confidence, which may show a widening contraction to 90.0 compared to 95.9 in the preliminary reading of the previous month and 95.9 last February. Otherwise, we followed the Senate's unanimous approval of the stimulus package, which is estimated About $ 2 trillion to support the US economy in the face of the Corona virus, and the package is expected to be passed in the House later today. 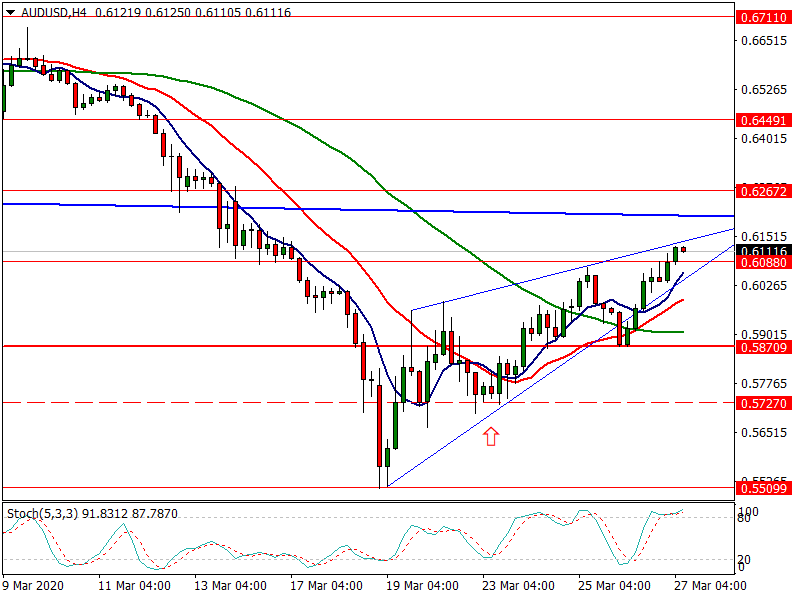 The Australian dollar versus the US dollar confirmed the breach of 0.5958 and pushed up to achieve the first positive target at 0.6097, noting that the price starts today with more bullish bias in an attempt to breach the mentioned level, which indicates that the price is on its way to visit the next corrective level at 0.6236.

Consequently, the bullish bias will be expected for today, organized within the bullish channel that appears in the picture, noting that stability above 0.5958 is important for the continuation of the suggested bullish trend.

The expected trading range for today is between 0.6000 support and 0.6236 resistance.