The Australian dollar fluctuated in a narrow range sloping to an upside during the Asian session, to witness its rebound to the fourth session in six sessions from the lowest since April 14 against the US dollar before the Australian Treasury unveiled the annual budget and on the cusp of economic developments and data expected today, Tuesday, by the economy. American, which includes FOMC members speaking online.

Investors are currently awaiting the American economy to release a statistical reading on job opportunities and job turnover, which may reflect an increase to about 7.50 million compared to 7.37 million last February, and this comes in the wake of labor market data at the end of last week, the rise in unemployment rates to 6.1. % Compared to 6.0% last March, contrary to expectations that indicated a decline to 5.8%.

In the same context, last Friday's reading of the employment change index for sectors other than agricultural showed about 266 thousand jobs added compared to 770 thousand added jobs, which was revised from about 916 thousand jobs in March, while the average hourly income index reading reflected an increase of 0.7 % Against a decline of 0.1% in March, beating expectations for stability at zero levels.

And this comes before we witness the participation of New York Federal Reserve Chairman John Williams in a panel discussion on the guaranteed overnight funding rate, futures rates and loan market developments at a seminar hosted by the Alternative Reference Prices Committee, before the speech of a member of the Federal Open Market Committee and Deputy Governor of the Federal Reserve Lyle Brainard. On the economic outlook at an event hosted by the Association for the Advancement of Business Editing and Writing. 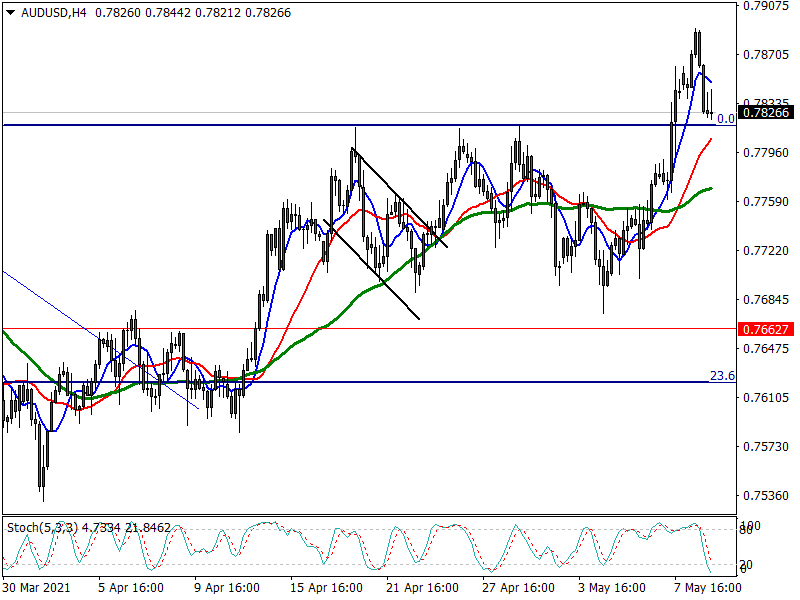 The Australian dollar against the US dollar rebounded to the downside after approaching our awaited target at 0.7900, to re-test the breached resistance, which turns into an important support now at 0.7810, which represents the first protection factor for the continuation of the suggested positive scenario in our recent reports.

The SMA 50 continues to support the price from below, to reinforce expectations for the continuation of the main bullish trend, reminding you that our extended target reaches 0.8000.

The expected trading range for today is between 0.7790 support and 0.7900 resistance