The single currency, the euro, fluctuated in a narrow range tilted to the downside during the Asian session, to witness its rebound from its top since the fifth of October against the US dollar, amid the scarcity of economic data by the economies of the euro area and on the cusp of developments and economic data expected today, Thursday, by the largest American economy. Economy of the World which includes the speech of members of the Federal Open Market Committee.

We have just followed the US economy Deputy Federal Reserve Governor and Federal Open Market Committee member Michael Bowman about monetary policy making and economic expectations in the Dickhuis Scholar Program Speaker Series on Money, Banking and Regulation in South Dakota, who expressed her support for the start of the Federal Reserve In curtailing the bond-buying program during the November meeting.

Fed Committee member Bowman also indicated that she supports the speedy reduction of the Federal Reserve’s purchases of bonds, which amount to at least $ 120 billion per month, to end in mid-2022, explaining that benefiting from the Federal Reserve’s asset purchases is now likely to be burdened by cost, adding that it is particularly concerned that asset purchases are Valuations are pushed higher or continued accommodative Fed policy could lead to risks to inflation expectations. 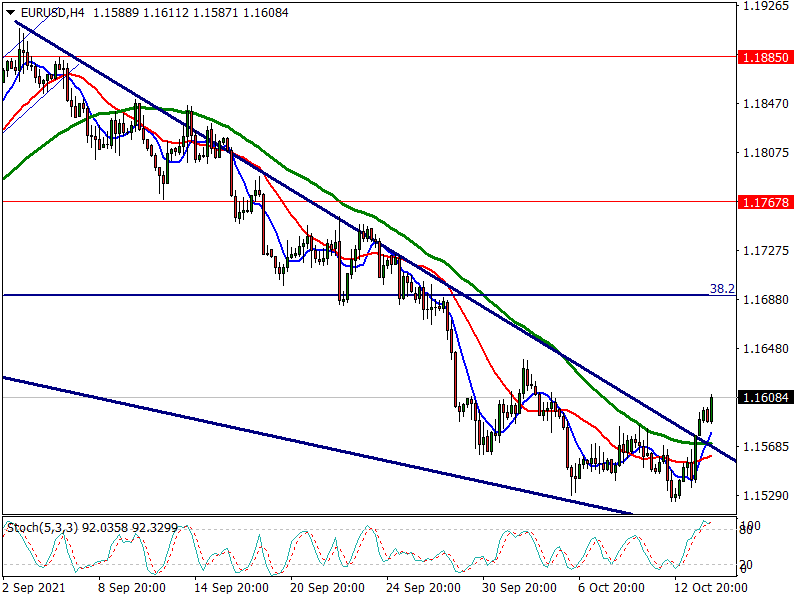 It crossed the resistance of the bearish trend and settled above it, to start an upward correction for the decline that started from 1.1909 areas, and it needs to breach 1.1615 to confirm the extension of the bullish corrective wave towards levels of 1.1670 then 1.1760.

Therefore, the bullish bias will be likely for the upcoming period, supported by the move above the EMA50, noting that breaking 1.1560 will stop the expected rise and pressure the price to decline again.

The forecast trend for today: bullish