The single currency, the euro, fluctuated in a narrow range that tends to decline during the Asian session, to witness its retracement for the third consecutive session from its highest since February 26 against the US dollar on the cusp of economic developments and data expected today, Monday by the economies of the euro area and the US economy, the largest economy in the world. These include speeches by FOMC member and New York Federal Reserve Chairman John Williams and Fed Governor Jerome Powell.

The markets are currently looking forward to the German economy, the largest economy in the euro area, the release of the retail sales index reading, which may reflect the acceleration of growth to 2.9% compared to 1.2% in the previous reading for last February, while the annual reading of the same index may show a contraction of the decline to 0.3%. Compared to 9.0% in the previous annual reading for the month of February.

This comes, before we see Spain, the fourth largest economy in the euro area, unveil the manufacturing PMI reading, which may reflect an expansion to 59.1 compared to 56.9 last March, and before the release of the same index reading by Italy, the third largest economy in the region, which It may show an expansion to 60.9, compared to 59.8 in March.

Up to the release of the final reading of the industrial PMI for each of the second largest economies of the euro area, France and Germany, in addition to the economies of the euro area as a whole, amid expectations that the final readings will confirm a widening in France at 59.2 compared to a widening of 59.3 in March, and confirm the expansion in Germany at 66.4 versus 66.6, in addition to confirming the expansion in the region as a whole at 66.3 versus 62.5 in March.

On the other hand, investors are currently waiting for the release of the final reading of the manufacturing PMI by Markit from the United States, which may reflect an expansion to a value of 60.7 compared to a widening of 60.6 in the initial reading for the past month and compared to 59.1 in March, before we witnessed it before. The US economy released a reading of the construction spending index, which showed an increase of 1.7% against a decline of 0.8% in February.

All the way to the speech of a member of the Federal Open Market Committee and New York Federal Reserve Bank President John Williams in a webinar hosted by "Women in Housing and Finance", before we witness the highly anticipated event today, which is Fed Governor Jerome Powell's talk about community development in an online conference hosted by him National Alliance for Community Reinvestment. 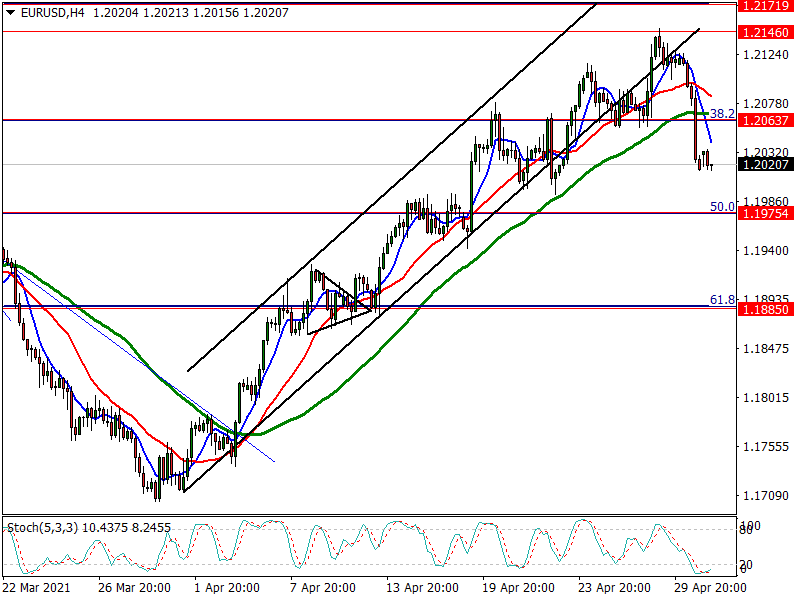 The EUR / USD pair confirmed a break of 1.2064 after closing last Friday's trading below it, which puts the price under expected negative pressure in the intraday term, on its way to visit 1.1975 as a next negative target, noting that breaking this level will extend the pair's losses to reach 1.1880 as a stop Next major.

Moving below the SMA 50 supports the expected decline, which will remain valid unless the 1.2064 level is breached and stability above it.

The expected trading range for today is between 1.1940 support and 1.2100 resistance