Futures contracts for gold prices fluctuated in a narrow range that tends to decline during the Asian session, to witness its rebound for the second session from its highest since February 26, amid the rebound of the US dollar index for the second session in a row from its lowest since March 18, according to the inverse relationship between them after Economic developments and data that they followed on the Chinese economy, the largest consumer of minerals in the world and the largest industrialized country in the world, and on the cusp of economic developments and data expected today, Friday, on the US economy, the largest in the world.

We have followed up on the disclosure of the National Bureau of Statistics of China on the seasonally adjusted reading of the gross domestic product, which showed a slowdown in the pace of growth of the largest economies in Asia and the second largest in the world to 0.6% compared to 3.2% in the last fourth quarter, worse than the expectations that indicated a slowdown in growth to 1.5%, While the annual reading of the same index indicated that growth accelerated to 18.3%, in line with expectations, compared to 6.5% in the previous annual reading for the fourth quarter.

On the other hand, investors are waiting for the US economy to unveil the housing market data, with the release of both the Housing Starts Index and the Building Permit Index, and amid expectations that the building permits reading will reflect an increase to about 1.75 million permits compared to 1.72 million permits in February. The home start-up reading may also indicate an increase to about 1.60 million homes, compared to 1.42 million in February.

Down to the disclosure by the largest economy in the world of consumer confidence data, with the release of the preliminary reading of the University of Michigan Consumer Confidence Index, which may show an expansion of 88.9 compared to 84.9 last March, in conjunction with the disclosure of consumer expectations about inflation for one year. Next and five years to come. 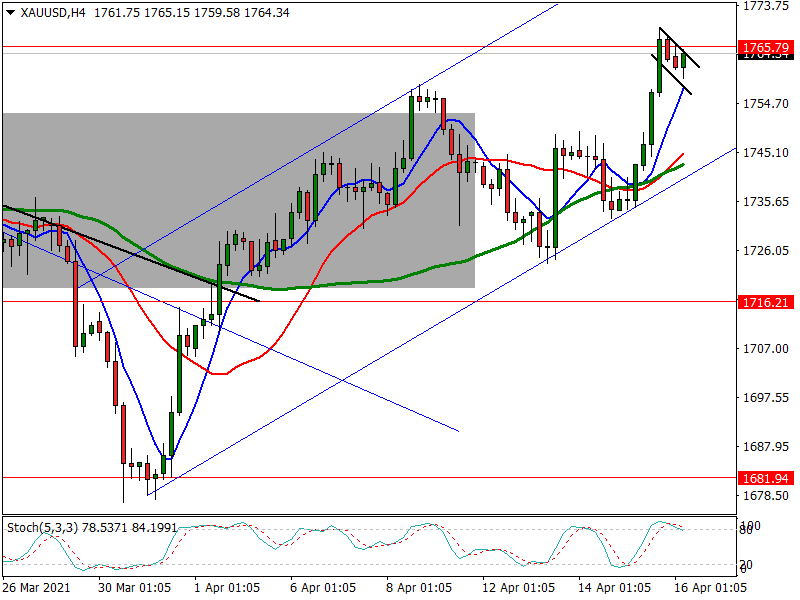 Gold price trading is stabilizing around 1765.00, and we note that the recent trades are confined to a descending minor channel that we think is forming a bullish continuation flag pattern, and therefore, opportunities are available for a continuation of the bullish trend during the coming period, reminding you that the next target will reach 1800.00.

Therefore, we will be waiting for more upside in the intraday and short term, bearing in mind that breaching 1760.00 will stop the suggested rise and pressurize the price to turn to the downside.