The US dollar fluctuated in a narrow range tilted to the downside during the Asian session, to witness its rebound to the second session from the top since December 3, 2018 against the Japanese yen, following the developments and economic data that we followed about the Japanese economy and on the cusp of developments and economic data expected today, Wednesday by the economy The US is the largest economy in the world, which includes the Federal Reserve's disclosure of the minutes of its last meeting.

We followed the Japanese economy with the release of the machinery orders index, which showed a decline of 2.4%, compared to a rise of 0.9% last July, contrary to expectations that growth would accelerate to 1.6%, in addition to that, in conjunction with the Bank of Japan's disclosure of the annual reading of the money supply index. M-2, which showed a slowdown in growth to 4.2% compared to 4.7% last August, worse than expectations that indicated a slowdown in growth to 4.4%,

On the other hand, investors are awaiting the release of inflation data by the US economy, with the release of the consumer price index reading, which may reflect the stability of growth at 0.3% during September, while the core reading of the same indicator may indicate an acceleration of growth to 0.2% compared to 0.1% in August. In August, the annual reading of the indicator may show stable growth at 5.3%, and the core annual reading may show stable growth at 4.0%.

And this comes before we witness the Federal Reserve revealing the minutes of its meeting, during which the interest rate was kept at its lowest ever, between zero and 0.25%, and the bond purchase program at $ 120 billion, up to the speech of the Vice Governor of the Federal Reserve and a member of the Federal Committee Open Marketplace for Lyle Brainard on the financial inclusion and economic challenges of the pandemic at a Fed event listening online with Oklahoma tribal leaders. 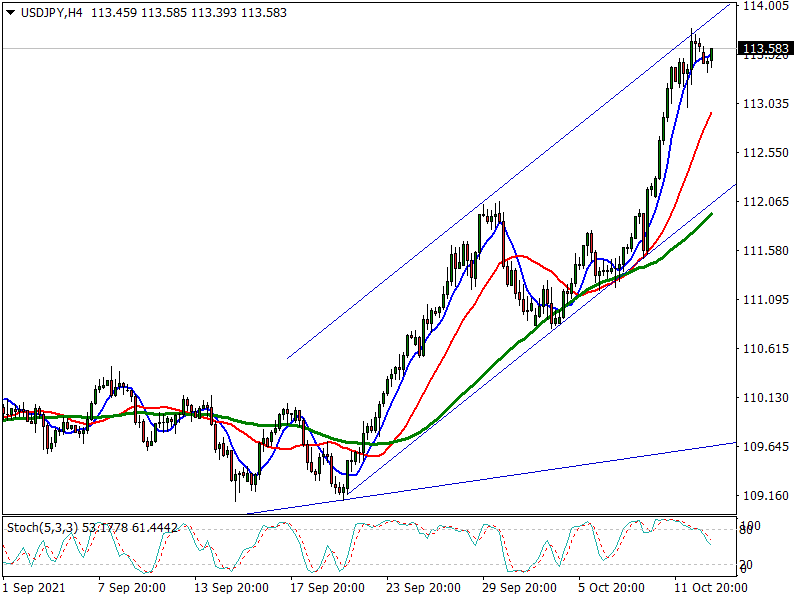 The dollar against the yen pair fluctuates around the resistance of the ascending channel that appears on the chart above, and the price is trying to obtain positive momentum that contributes to pushing the trades to resume the bullish trend, which targets the 114.00 level as a next station.

So far, we continue to suggest the bullish trend that gets continuous support from the EMA50, provided it holds above 113.10, as breaking it will pressure the price to test the 112.30 areas before any new attempt to rise.

The expected trading range for today is between the support 112.90 and the resistance 114.10

The forecast trend for today: bullish