The single currency of the European Union region fluctuated in a narrow upward range during the Asian session, reversing its seventh session in 10 sessions from its lowest since May 23, when its lowest since May 19 of 2017 was tested against the US dollar on the brink of developments And economic data expected Tuesday by the economies of the euro zone and the US economy the largest economy in the world.

The markets are now looking for euro-zone economies as a whole to unveil the Sintex Consumer Sentiment Index, which reflects a contraction of 2.3 to 5.3 in May, hours before European Central Bank President Mario Draghi delivered remarks on Wednesday. European Central Bank for Central European countries, Eastern and South-Eastern Europe.

The Italian Finance Minister Giovanni Treya expressed his confidence in the chances of reaching an agreement with the European Commission on the Italian budget despite the threats of disciplinary measures against Italy, adding that it is possible to reach a solution to the crisis between Brussels and Rome through the work of The Government of his country to comply with the financial rules of the Commission and to clarify that its program will make the budget compatible with the rules in the European Union.

On the other hand, investors are looking for the US economy to release the Producer Price Index (PPI), a preliminary index of inflationary pressures that could reflect a slower growth rate of 0.1% versus 0.2% in April. 1.9% versus 2.2% in the previous annual reading for April.

In the same context, the core reading of the PPI may accelerate the pace of growth to 0.2% from 0.1% in April, while the core annualized reading of the same index may show a slowdown in growth to 2.3% from 2.4% in the previous April reading , And comes hours before the disclosure of inflation data for the last month with the release of the Consumer Price Index on Wednesday. 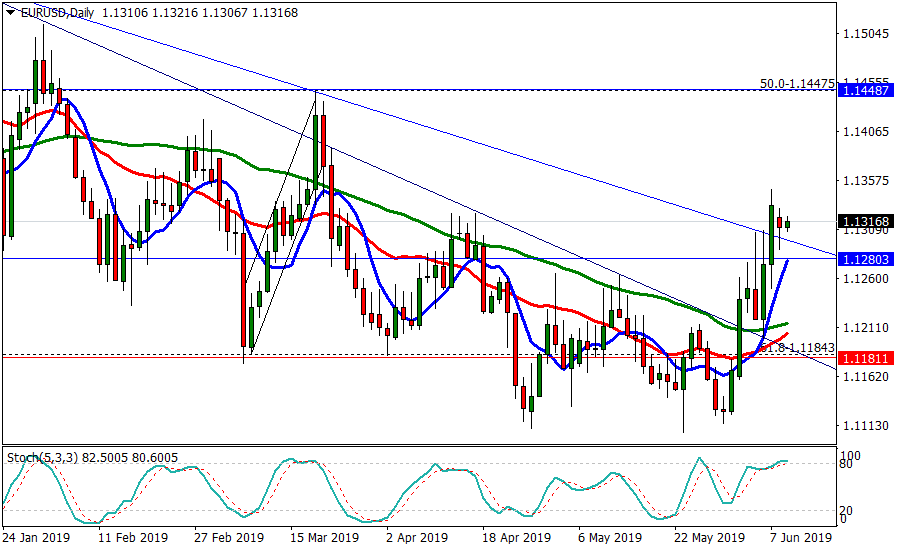 EUR/USD pair has not seen any strong movement since yesterday, and continues to fluctuate near the 1.1300 level. Therefore, there is no change in the bullish scenario with the next key target at 1.1443, supported by SMA 50 which carries the price from the bottom. Levels of 1.1255 and 1.1180 for the continuation of the expected rise.

The general trend for today is bullish.