The US dollar fluctuated in a narrow bullish range during the Asian session against the Japanese yen following the developments and economic data that followed from the Japanese economy and on the eve of developments and economic data expected on Wednesday by the US economy, the largest economy in the world, including the speech of Federal Reserve Governor Jerome Powell in Kansas City.

On the Japanese economy, we followed the release of the preliminary annual reading of the Machinery Equipment Orders Index which showed that the decline shrank to 35.5% from 37.0% in August. However, yesterday, Prime Minister Shinzo Abe expressed his government's confidence in Bank of Japan Governor Haruhiko. Kuroda, while stating that Kuroda is setting the appropriate monetary policy for Japan, and that there are no plans for additional budget in the face of economic risks.

On the other hand, investors are awaiting the US economy for the release of the employment and employment turnover, which may reflect a rise to 7.35 million versus 7.22 million in July, following hours of the US labor market data released last month that showed Friday the unemployment rate fell to its lowest since December 1969 to 3.5% compared to the previous reading and expectations of 3.7%.

Markets are also looking to reveal the final wholesale inventories figure, which could show growth at 0.4%, unchanged from the initial reading for August and 0.2% in July, before we see Fed Governor Jerome Powell and the committee member. Federal Open Market and Kansas City Federal Reserve President Esther George at a panel discussion at the Federal Reserve listens.

The FOMC Meeting Minutes were released on September 17-18, in which the Federal Funds rate was cut for the second time in a row by 25 basis points to between 1.75% and 2.00%. It was in line with expectations, with the Commission's expectations for growth, inflation and unemployment as well as the future interest rates for the next three years revealed. 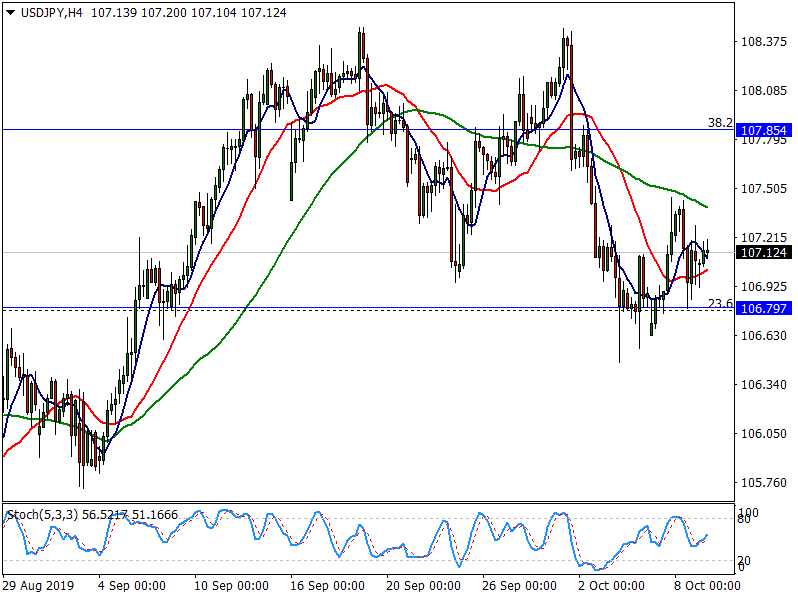 USDJPY fell yesterday to settle below 107.20, and is under negative pressure from SMA 50, supporting the continuation of the expected bearish trend for the coming period, whose targets begin to break 106.70 to confirm the extension of the downside wave towards 106.06 then 105.50.

Conversely, a breach of 107.70 will stop the expected decline and drive the price to the upside.

Expected trading range for today is between 106.50 support and 107.90 resistance.